In the early immigration year of 1849, the first -- and only -- hotel began operation in Zeeland. With the arrival of the steam railroad in 1872, most businesses moved from Cross Street (Central Avenue) to North Street (Main) in order to take advantage of the greater influx to the community. The Zeeland Hotel was no exception and was soon moved to the northwest corner of North Street and Elm.


The rooms were often occupied by salesmen, crews of linemen who would arrive to make repairs in the area, as well as numerous "regulars". 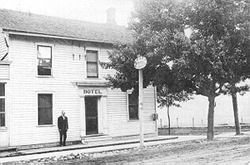 
By the year 1955 the Zeeland Hotel had served its purpose and was sold to the Zeeland State Bank. The wood frame building was later demolished, and the site became a parking lot for First Michigan Bank and Trust Company.